On behalf of the State Media Authority of Rhineland-Palatinate (LMK) House of Research carried out a large-scale program analysis of the television channel Rhein-Neckar Fernsehen (RNF). One of the aims of the study was to find out how local and agglomeration television can meet the quality expectations of television in the face of a difficult economic situation.

The main part of the study was a detailed quantitative content analysis of a program sample of 14 program days with 24 program hours each. In a two-stage procedure, the recorded video material was structurally analysed using computer-aided coding, in which the entire programme was broken down into its individual broadcasting elements (advertisement, segment, packaging). All transmission elements were then subjected to an in-depth analysis. Thus we were able to get to the bottom of attributes such as “theme”, “geographical reference”, “journalistic quality” and many more. With the help of the generated data, a comparison of structure and content between the regional broadcaster RNF and the large, nationwide television programs was possible. The study also included a content analysis of three regional daily newspapers to enable an intermedial quantitative comparison of structure, content and quality between TV and the press.

The results of the study showed that the metropolitan television station RNF largely meets expectations and can compete with nationwide private television programs in terms of structure, content and quality. RNF was characterised by a high proportion of journalistic broadcasts and segments. The program profile is dominated by news, talk and advice magazines as well as other journalistic television formats. Thematically, RNF was dominated by cultural and church themes. The station fills about 15 percent of the transmission time with repetitions, but this share is as high as 35 percent for private full-service television programs (kabel eins). RNF reports plenty on locations, cities and federal states of the transmission area, albeit with a very different weighting. In addition, the station attaches high importance to current regional political reporting and strives for political balance.

All results of this extensive study have been published as a report in the second volume of the LMK study series and can be downloaded here. 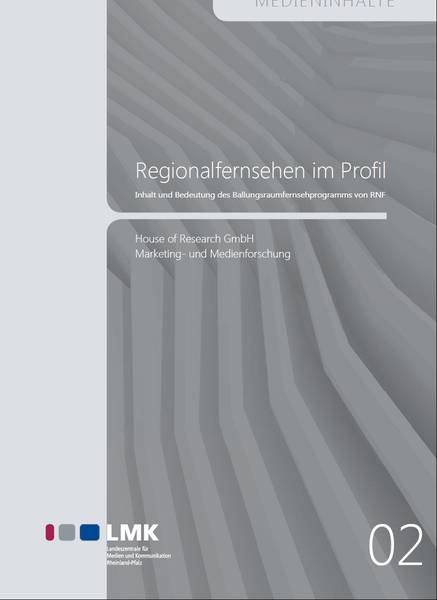